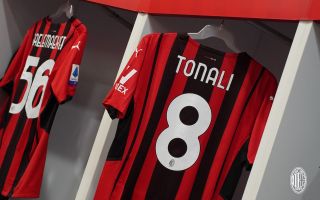 CM: Tonali passes latest test and reaffirms himself as the midfield leader – a pay rise is coming

Sandro Tonali continues to establish himself as the leader of AC Milan’s midfield department having now fully overcome his difficult first season.

Calciomercato.com reports how last night at San Siro against Roma the young midfielder passed another important test as he was tasked with trying to stifle the threat from Mkhitaryan, Pellegrini and Veretout of Roma but also establish dominance in the middle of the park and protect a makeshift defence.

With Kessié and Bennacer at the African Cup of Nations Tonali has even more responsibility, but it has presented an opportunity for him to confirm his growth and show Roberto Mancini that he is ready to be a central part of Italy’s plans because his dream is to play the World Cup in Qatar after helping his nation through the play-offs, of course.

Going back to the summer, it must be remembered that Tonali took a pay cut to unblock the negotiations with Brescia, with his salary reduced from €1.6m net per season to €1.2m, which was a gesture that was greatly appreciated by the management.

Now, contacts with his agent have already started to extend the contract for another season until June 2027 and he would get a pay rise to offset the summer cut. A Scudetto with his beloved Milan, a new deal and the World Cup – three targets for Sandro.