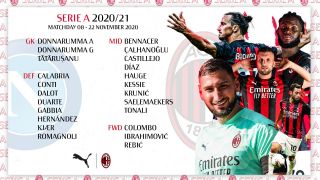 AC Milan have named their 23-man squad for Sunday night’s crucial encounter against Napoli at the Stadio San Paolo.

Milan will be looking to make it 20 Serie A games without defeat on Sunday as they face Napoli at the San Paolo, a stadium they rarely win at.

The Rossoneri have recharged their batteries over the international break – or at least those who weren’t called up for their national teams have – and they are ready to resume their league campaign sat two points clear at the top of the table.

However, there are a couple of setbacks to deal with including the fact that head coach Stefano Pioli and his assistant Giacomo Murelli will both miss the trip due to Coronavirus, plus the injury sustained by Rafael Leao.

Below is the squad called up for the game…