The AC Milan Women beat Napoli by a score of 4-0 last Sunday. The win was a vital victory and gave them the three points they needed to remain in second place.

Highlights of the match are below…

The most notable difference between this match and the last one is the fact that Valentina Bergamaschi replaced Federica Rizza at right-back. Francesca Vitale also started her third consecutive match, as she’s filling in for the still injured Giorgia Spinelli.

There is no ETA as to when Spinelli will be back in the lineup.

The first half of the match started off rather surprisingly, with Napoli encamped in the Rossonere’s half. The first real chance of the game also came from them, as Emma Errico’s shot hit the post. It took only forty seconds for them to create that chance and fortunately for Milan, Errico’s shot wasn’t converted. However, it wouldn’t take long for the Rossonere to get on the front foot again. Natasha Dowie appeared to have scored the first goal of the match at the four minute mark. Unfortunately, the goal was ruled offside.

During these first few minutes, Milan maintained possession while building up their attack. However, none of their initial movements threatened Tasselli’s goal as the Rossonere failed to complete their chances in the final third.

Napoli did not take advantage of this, as they struggled to get into Milan’s half and only managed a few attempts from outside the box.

Milan, on the other hand, would not have to wait long to score their first goal. Their first goal began through the actions of both wingers, as Valentina Bergamaschi and Linda Tucceri Cimini made simultaneous runs down the flanks and got behind Napoli’s defense.

Bergamaschi then joined Dowie inside the box to create a numerical advantage and to get into a scoring position. Tucceri Cimini then sent in a cross from the left that was then parried by Napoli’s goalkeeper, Sabrina Tasselli. The ball then slipped out of her gloves and landed at the feet of Bergamaschi, who then slotted it home.

Milan’s resident joker card has been waiting to break her duck for quite some time and fortunately for her, she was able to do so at the 21st minute.

Though both teams deployed the same 3-5-2 formation, Milan’s set-up proved to be more effective thanks to the talent and experience of their players. Napoli’s use of the formation consisted of them using their wide players to make runs on the flanks as they tried to drag Milan’s fullbacks out of position. They would then open up gaps in the middle for their attackers to exploit.

Napoli also looked strong at the back as they were actively trying to prevent Milan from having too much free space.

They were, however, not successful in this regard, as whenever they attempted to do this, Milan would press them and win the ball back. The Neapolitans were virtually pinned back into their own half as Milan launched wave after wave of attacks. The Rossonere earned multiple corners as a result of Bergamaschi’s crossing attempts and Giacinti’s shots, and it eventually paid off for them.

The team’s second goal came through Boquete’s outstanding run from the left-wing, in which she bypassed two defenders and crossed the ball into the box. Tasselli made another error as she tried to parry the ball, only to have it land directly onto Hasegawa’s head.

And with that goal, Milan ended the first half with a 3-0 lead.

After gaining a two-goal lead during the first half, Milan decided to take their foot off the pedal for the second half, if only just a little.

Their pressing intensity took a slight dip, as did their attacks per minute. However, their recoveries per minute increased from 0.38 to 0.47, meaning that the Rossonere were more comfortable trying to defend their lead, rather than frenetically pressing for more goals.

Despite this, Milan would not end the half scoreless, as they would end up doubling their tally.

The team got their third goal at the 42nd minute after three players worked in tandem to press a Napoli defender and squeeze them off the ball. Taselli then tried to block Milan’s subsequent shot, only for it to land in front of Dowie, who then converted her chance. Taselli’s lack of fortune resulted in nothing but good luck for the Rossonere.

The sequence for Milan’s fourth goal was a result of a poor clearance by Napoli’s defense. Napoli’s failure to clear the ball then allowed Vitale to quickly pass the ball to Giacinti, who then scored. 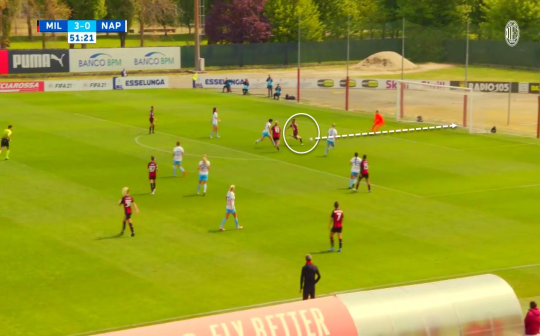 Valentina Giacinti then scored Milan’s third goal of the game and her 17th of the season.

Despite how dominant the Rossonere were during this match, Napoli did have a few chances of their own. The high line that Milan employs makes them vulnerable to counter-attacks, but
couldn’t take advantage of them because due to their forwards not being clinical in front of the goal.

For example, in this counter-attack, two Napoli players were
unchecked inside the area, but the ball holder chose to shoot the ball rather than making an assist to one of them. 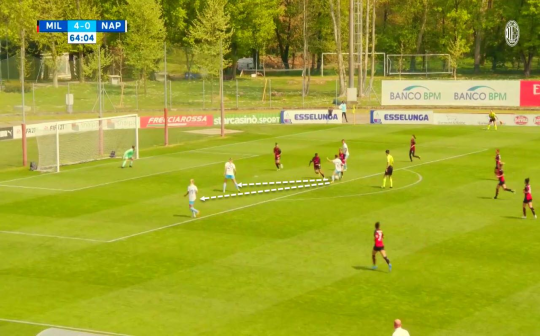 The Neapolitans launched the attack shortly after the fourth goal and tried to beat Korenčiová in the net, with the substitute Rijsdijk leading the attack. However, they were unsuccessful in their attempts and did not convert their chances. The Rossonere ended the match with a clean sheet.

Milan would then win their sixteenth match of the season. The team is still in second place and stands a good chance of qualifying for next season’s Champions League.

Goalkeepers must be prepared to play with the ball using their feet and this game was another indication of how excellent Milan’s Mária Korenčiová is in possession.

With the ball at her feet, Korenčiová’s helped her team build-up play with her distribution, rather than attempting long balls as most other goalkeepers do. As a result of her good performance, Milan were able to score four goals and keep a clean sheet in the process.

Dowie gets her 11th

Natasha Dowie scored her eleventh goal of the campaign during the match against Napoli. The English forward continues to break records during what has been a remarkable season for her.

The sequence leading up to Yui’s goal was a thing of beauty.

It first starts with an excellent run by Vero, who evades, a whole line of defenders, and then gets a pinpoint pass off to the forwards.

The resulting shot was then blocked by Taselli, who then pushes the ball directly to Hasegawa’s head.

The rest, as they say, is history.

Despite being on the wrong end of a 4-0 loss, Milan’s winter signing, Guðný Árnadóttir, still managed to play well during this game.

Árnadóttir played a full 93 minutes in the left centre-back role. She was quite effective in one-on-one situations, as she won 59.8% of her duels and completed 62% of her actions as well (Wyscout).

The player will no doubt be a boon to Milan when she rejoins the team next season.

Not surprisingly, Milan dominated the stats. The team had 66% of the possession while also being quite accurate with their passes, as they completed 83% of them.

Milan also had sixteen shots on target and eight corners throughout the game.

Once again, it was a dominant display from them.

AC Milan will play Inter in the second leg of their Coppa Italia tie this Saturday. They’ll be looking to get their revenge against the Nerazzurre after the first leg loss and to advance to the final.