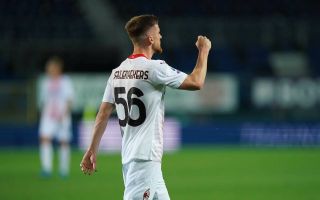 GdS: Boban’s final gift appreciated by all at Milan – the valuation of Saelemaekers has doubled

There were some eyebrows raised when Milan decided to sign Alexis Saelemaekers from Anderlecht, but he has proven to be worth the investment.

As La Gazzetta dello Sport writes, Saelemaekers is the ‘joker’ of Milan and the player that Stefano Pioli never likes to deprive himself of. He has made the right wing spot his own and has often resisted the rotations that have happened in other departments.

This season Saelemaekers amassed 8,941km covered, the fifth-most behind Kessie, Calhanoglu, Theo and Tomori. Belgium boss Roberto Martinez took him to the European Championship as a reserve, but next year he will listen to the anthem of the Champions League with the Rossoneri.

Maldini spoke of him like this: “Alexis’ is a beautiful story. ‘We took Salt… something,’ they said. They let themselves be influenced by names and teams.”

Signed from Anderlecht in January 2020, he can play as both a right winger and a right-back, having amassed a dozen games with the Belgian U21 national team and three appearances in Europe. His first came against Fenerbahce in 2018, but now he dreams of the Bernabeu: “I’ve shown people what I’m capable of.”

His goal at Rio Ave in the Play-Off round of the Europe League qualifying made him the youngest foreigner to score for Milan since Pato (21 years and 96 days). Since then, Saelemaekers has never played so much (40 games), had never amassed so many assists (7) or scored so many goals (3).

Purchased by Milan for €7m, now Alexis is worth more than double and not only that but he is a symbol of the Rossoneri’s vision: “futuristic” and quality young players. Pioli praised his positive attitude and flexibility and now Milan are reaping the rewards of Boban’s last gift before his farewell. “You will see, he will amaze you,” the Croatian said.