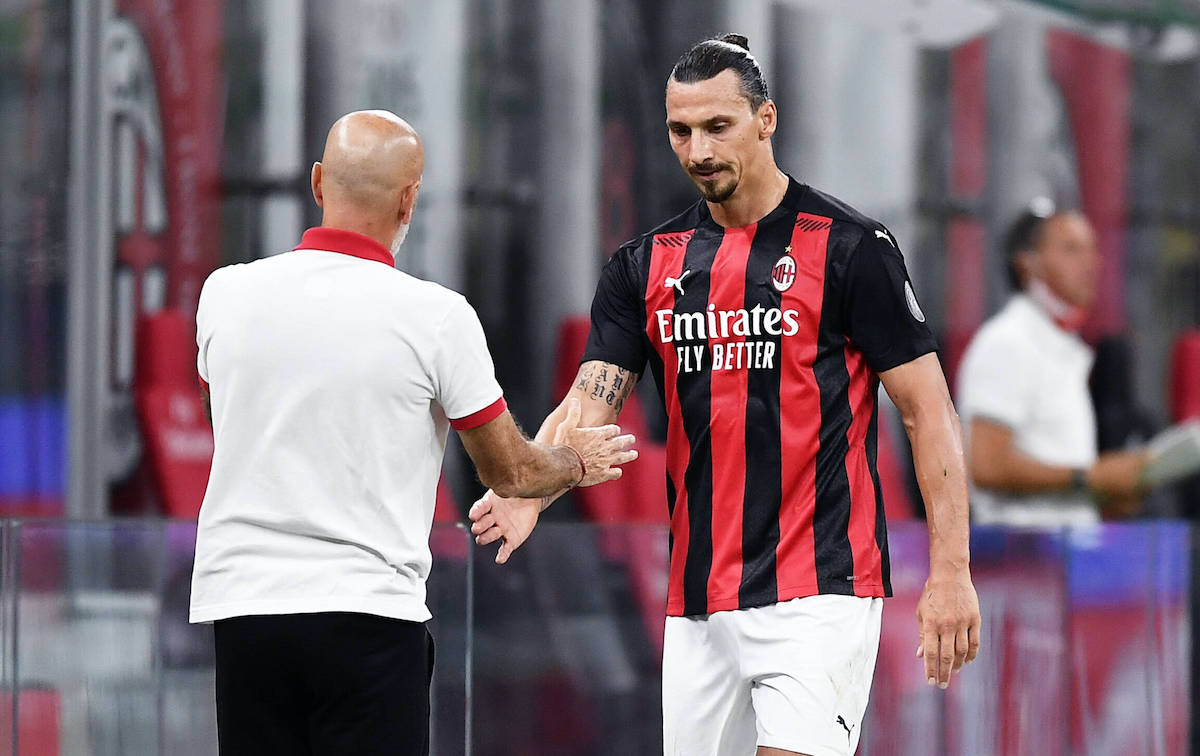 AC Milan striker Zlatan Ibrahimovic has heaped praise on head coach Stefano Pioli, insisting that the team are where they are because of his hard work and mentality.

Ibrahimovic gave a long interview to UEFA about a number of different topics, beginning with the relationship he has with Milan head coach Stefano Pioli.

“Maybe I Zlatanised him. Maybe he became like me. He arrived at a Milan where the environment was difficult. If we are where we are now it is thanks to him and the work he has done, he is a great coach,” he said (via MilanNews).

“I already knew Pioli because I played against him in Italy. The teams he has had have gone a lot up and down, from top teams to small ones. When he took the team it wasn’t where we are now. If we are where we are now it is thanks to him and the work he has done. Thanks to the way he works, to his mentality.

“He puts a lot of pressure on the team, he demands a lot, even if it is a young team. Maybe he has more patience than me, but obviously he is more mature and more experienced than I. He is used to working under pressure and has been in situations where the last two or three months he had to fight to stay in Serie A. And this is obviously different since you have to fight to win, but at the same time there is so much pressure because you have a team that is not at the level of the top five where you fight for the title.

“Instead you fight not to be relegated and play in Serie A. It’s different in terms of pressure but it’s very stressful and you have players with less quality than the big teams. In those situations you have to give something other than what you give in the big teams.

“This is not easy, but he has the experience and everything he has brought since he arrived has shown with the results we have achieved. Mister Pioli came here and demonstrated with his work that he is a great coach. Now there is no longer any discussion as to whether he is the most suitable for this job.”

Milan have gone on an incredible journey since the return of Zlatan Ibrahimovic at the start of 2020, one that seems to be trending upwards.

Many had doubts about how the Swede would cope with playing in one of Europe’s big league at the age of 38 having just come off the back of a stint in the MLS, and his response has been emphatic with 14 league goals in 13 games.

“You are not here because someone has to wait for you, you are here to play. I don’t care if you are young or not, I cannot think about the fact that you are young and your time will come. When you play for Milan there is no time, you have to do well now. If I don’t play well, Milan will buy another striker at the next transfer market who will play better than me, that’s why I have to play well and this applies to everyone.

“We must all be up to it, regardless of whether we are young or mature. Off the pitch it is obviously different, if you are Rafael Leao I speak and treat you in a way. If you are Simon Kjaer, you are more mature, you have children, obviously it is different. But on the pitch they are all the same.”

When Ibrahimovic arrived in January he had to be the quarterback of the attack, not only finishing moves but also allowing the play to come through him as a point of reference, but now he has redefined his game in such a smart way.

He has become a figurehead and leader of a project installed by Elliott Management – Milan’s owners – built around buying and developing young players into the core of the future.

“When I was young the players close to me were fantastic. When I came to Italy for the first time I had players next to me who saw me as the young kid who brought so much energy and adrenaline. Everyone was great players, they had won important titles, they were stars and they were playing at high levels,” Zlatan said.

“At the time if you were considered a great player, you were really a great player and to become one you had to play well and show off for a long time. Today the new generation plays five minutes and there they see them as great players. I’m happy to come from the old school.

“Social networks have changed everything, today thanks to social media players are seen as champions despite having done little maybe. Before it wasn’t like that. Before you had to achieve this big, for a long time, to be seen as a great player. Today is different. I like the old school more. To be recognised as a great player, you had to show it.”

On LeBron James: “What he does is phenomenal, but I don’t like it when people with some kind of ‘status’ talk about politics. Do what you’re good at. Do what you do. I play football because I’m the best at playing football. I don’t do politics.

“If I had been a politician, I would have done politics. This is the first mistake famous people make when they feel like they’ve arrived. For me it is better to stay away from these topics, and do what you are in good, otherwise you risk not making a good impression.”