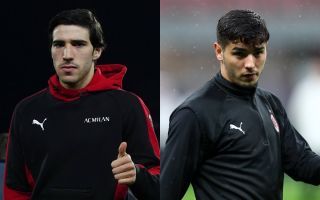 Brahim Diaz and Sandro Tonali both joined Milan ahead of this past season on an initial loan deal and the Rossoneri are no working hard to retain them. For now, though, they have encountered a few roadblocks.

Tonali joined on a paid loan and Milan also included a €15m buy-out clause in the deal. The clause recently expired as the Rossoneri are still trying to lower the overall cost of the operation, in talks with Brescia.

As for Diaz, his loan was a dry one and Milan were always expected to open talks with Real Madrid again. However, according to Tuttosport (via MilanNews), the Rossoneri haven’t made much progress in the last few days.

Diaz and Tonali have both made it very clear that they want to stay at Milan for next season as well. Finding an agreement with the respective clubs, though, is a different question and one that Paolo Maldini and Ricky Massara are working on.

READ MORE: Milan putting pressure on Giroud’s entourage as they could walk away